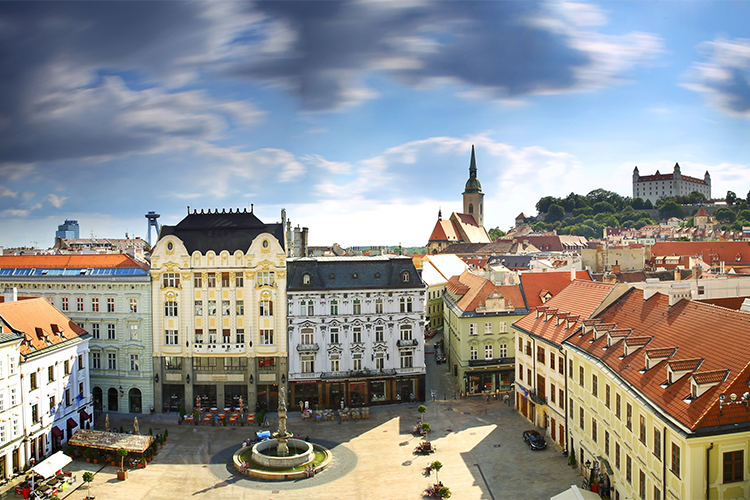 The building plans for a brand new conference centre in the heart of the Slovakian capital have been announced. The city now reviews the second phase of the Eurovea development project to make it future-proof. For the Bratislava Convention Bureau, the good news means to put more focus on city’s unique assets – accessibility, innovation and execution.

Until the Velvet Revolution of 1989, for many Europeans Bratislava was one of those mysterious names on the indicator scale of antique radios, in between Birmingham and Budapest on the long wave. As soon as Slovakia gained its independence in 1993, the city could pick up its ancient role as a capital once again and add a new chapter to a rich history that dates back to medieval times.

From the middle of the sixteenth century onwards, Bratislava (then Pressburg) became the coronation city for the Hungarian monarchs. Eleven kings and seven queens, many of them later to be anointed emperor or empress of the Holy Roman Empire, started their monarchic career in Bratislava. It turned the city into an invaluable treasure house of historical buildings, cultural heritage and amazing stories.

In December 2018 Matúš Vallo was elected the new mayor of Bratislava. Vallo is a renowned architect who got a scholarship at Columbia University and is an internationally renowned urban activist. In his electoral programme, he committed to more transparency, better communication with the citizens and a well-considered city development strategy. The city has scrutinized the plans for the Eurovea Project that were then on the drawing table and suggested some changes to stay in line with the development strategy.

“We are looking forward to the future convention centre for Bratislava”, says Nina Erneker, Head of the Bratislava Convention Bureau. “Since the start of our bureau, we have been extremely successful at attracting a variety of smaller international events to the city. This year we hosted the WONCA Europe conference with 2,000 delegates and the IIW conference with 1,500 participants. To do so, we had to combine the meeting capacities of three major hotels, but not a single delegate had problems with that. All the venues are within a 5 minutes’ walk from each other; commuting from one hotel to another was more of a relaxing stroll in between sessions.”

“Obviously, a purpose-built conference venue would make it lots easier to convince meeting planners and PCO’s of sizeable international events. Most of them are surprised when they learn that Bratislava is actually sometimes much more convenient to reach to Vienna International Airport than the city of Vienna itself because of the traffic. All of them are stunned when they discover our 3,200 room hotel capacity in the 4 and 5 star range. They are charmed by the atmosphere in the inner city, where most of the traffic is banned. But when they ask whether we can assemble 2,000 people in one single auditorium, the current answer is no, – unfortunately.”

Recently, British car manufacturers Land Rover and Jaguar announced new investments in Nitra, on the outskirts of Bratislava. They join Volkswagen, Peugeot-Citroen, Volkswagen and Kia, making Slovakia the country with the highest per capita production in the automotive industry worldwide. ‘Green Detroit on the Danube’ thrives with skilled labour, a historical heritage in manufacturing skills and a strong determination to innovate.

Nina Erneker: “The Motor City concept is more than just a marketing gimmick. The automotive sector accounts for more than 4% of the industrial activity. Moreover, it attracts lots of innovative branches. We are pretty strong in IT, telecom and banking. Start-ups love Bratislava because it offers all the ingredients for success: skilled and motivated workers, an open investment climate, a relatively young population with an entrepreneurial mind-set…  I guess we now have all it takes to become the number one destination for a broad range of business events for the international automotive community, – and for the communities that connect to it.”

Bratislava’s destination marketing baseline is ‘Surprisingly Close – Exceptionally Smart’. It takes no more than a few hours to fully understand what this slogan boils down to in practice: Stare Mesto, the historical heart of the city, banned all traffic from its cobblestones and is home to dozens of cosy restaurants and bars, where locals and visitors love to meet over a cup of freshly roast coffee, a heart-warming shot of Slivovica or a local potato dumplings dish.

Bordering the Stare Mesto and Ruzinov boroughs, between Pribinova street and the river Danube, is the Eurovea area. Surprisingly close to the intimacy of the old town centre, and fairly smart as a modern city development project. Eurovea opened its door to the public in 2010 and features apartments and offices, a shopping mall with some 180 shops, a casino and cinemas, catering outlets and a Sheraton hotel with 209 rooms. The second phase of the project, originally scheduled for 2024, should include another 24,000 sqm of retail, 40,000 sqm. of office space, Slovakia’s first skyscraper and 2,245 parking spots. Oh, and add a 2,000 seats conference centre to that.

Nina Erneker: “To a certain extent, Eurovea symbolizes our eagerness to progress. Bratislava ranks in the top 10 of international meeting destinations (according to The Kongres Magazine 2018 – Meeting Star Awards). We are strongly aware of our unique assets – accessibility, intimacy, multiculturalism, walkability, heritage, hospitality, multilingualism, safety –  but at the same time, we are very determined to look forwards and embrace new opportunities. As far as I know, the Eurovea Congress Centre will soon be the first purpose-built venue that neighbours ten centuries of history.”

The Bratislava Convention Bureau started its operations in 2012, as part of the Bratislava Tourist Board. It is a non-profit organization with the City of Bratislava as a main partner and 77 members (hotels, agencies, venues, museums, other vendors). BCB operates a chain of Tourism Information Centers and is also a part of the regional DMO called Bratislava Region Tourism.