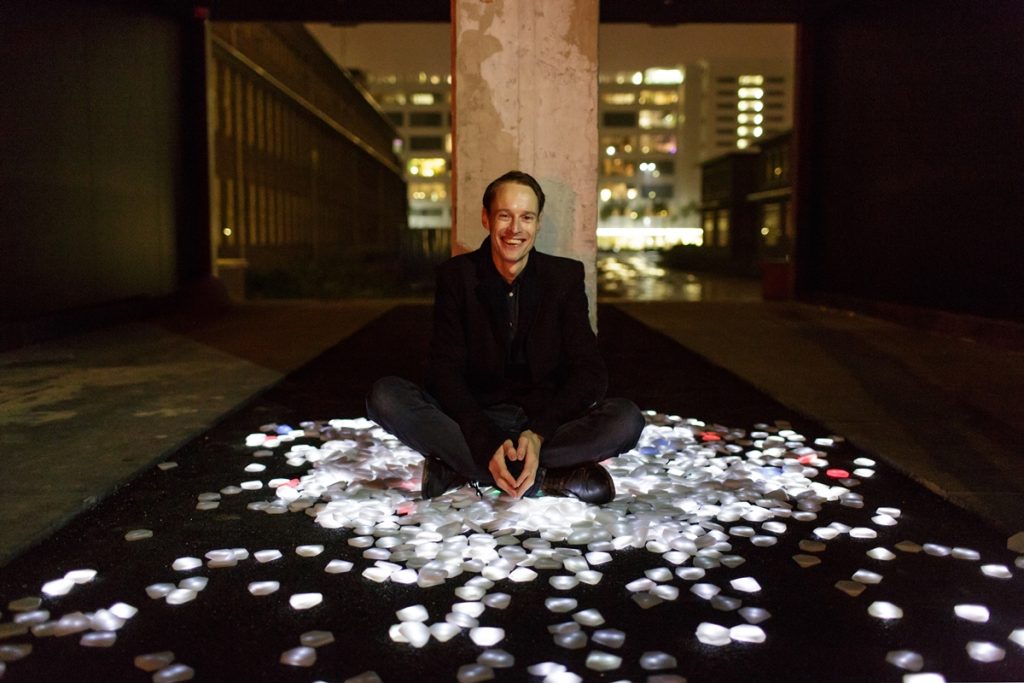 Daan Roosegaarde (34) is an artist, innovator, entrepreneur, inventor. With his “techno poetry”, where idealism and technology blend together, he stimulates an international public: “I teach people to look at and think about the world differently.”

How did you become a speaker?

“The first time I gave a lecture was in 2002, at the art academy. I could hardly hold my glass of water. Because I was so nervous. Of course afterwards I got an enormous kick out of it. My lectures always result from my designs. Because they are interactive, examine the relationship between man, technology and space. An example is the Intimacy project – dresses that become transparent upon physical arousal. They teach people to look at their fellow human beings again, rather than at a screen. Still, technology is the means.
Under the flag of Studio Roosegaarde, I set up two design, labs in Rotterdam and Shanghai. Before long, I was also filled with the need – in addition to creating – to tell the world stories surrounding such a design. Like the story surrounding the dresses. Speaking is an exceptionally good way to do this. Particularly international conferences give my message something tangible. The audience is grateful and responsive. This curious attitude towards innovation is now also taking root in the Netherlands.”

Who taught you the ropes?

“My parents are teachers; perhaps I inherited the drive to tell stories from them. But it mainly took lots of practice. My ideas are radical, so there’s plenty – the story of my life – to explain. This goes intuitively. And with much pleasure. For example, my Smart Highway project now calls for an explanation in the Netherlands. Think of motorways with glow-in-the-dark markings. Or road signs – embedded in the asphalt – that only appear when necessary. Or wind-operated lampposts. During lectures, I started to tell my audience more and more about the vision behind a design. That is why my lectures never become repetitive. I tailor the story, my message, to a particular audience.”

Do you ever convey something like a general message?

“That we don’t live in a static world, but a fluid one. The things we are doing today, in terms of the economy and energy, are no longer effective. For instance, the government aims to cut down on the number of lampposts. To save money. However, we shouldn’t do less but more! My lectures are about creative and innovative ideas. About a new world. Don’t create a comfort zone for yourself. Don’t be afraid to dream, to move away from your intimate circle of friends and enter into relationships that may feel a little awkward. Only then will unique things start to happen. I teach people to look at the world differently. That is important for me.
When people thank me afterwards, I ask them if a particular project touched them. That is almost never the case. “It’s your way of thinking, the way you see things,” they tell me. I hope they do something with it. I also include people’s responses in my own thought processes. I regard my lectures as a kind of laboratory, where new ideas are born. For example, there once was a director of a road construction company in the audience. Studio Roosegaarde now works with his firm on the future of the motorway.”

What is your worst experience as a speaker?

“I’m a technology buff, so I find it very frustrating when failing technology draws attention away from what’s being said. A beamer that falls onto the ground, a defective sound system. But you should always carry on. It makes you improvise.
There once was a crying woman in the audience. She was genuinely moved by my projects. The auditorium fell silent, and the 250-odd audience members turned to look at her. I let her speak, but at a certain point, things became too awkward. Two years ago, I was a guest on Zomergasten (Summer Guests). I’m not easily thrown off balance ever since. That programme is so intense! You step into an intimate setting and, at the same time, have an enormous reach. Whether I’m still nervous before I take the stage? For a minute. I just think to myself: I’m going home. The moment I’m on stage, it’s gone, and I enjoy myself.”

What is your speciality?

“Stimulating others. Trying to enter into an honest dialogue. If I want to be right, I’ll surround myself with like-minded people. Also, I will never accept an invitation for a lecture where I can’t provide this added value. Recently, former prime minister Jan Peter Balkenende – a very good speaker, by the way – and I were both going to give a lecture for the same organization. Jan Peter suggested we turn it into a double presentation. A peculiar cocktail. A Zomergasten-like atmopshere was created on stage. In an open dialogue, a new story emerged; we helped each other evolve.”

Have you been surprised lately?

“People’s enthusiasm surprises me. About my ideas and designs. That is a strange thing to experience. After all, I’m used to the fruits of my art. For example, Studio Roosegaarde receives a large number of hand-written letters. From people who value our outlook for the future. Which is always based on idealism combined with technology. I sometimes call myself a hippie with a business plan. I don’t have a crystal ball, and I don’t have all the answers, but I like to make suggestions. Preferably radical ones. I will shortly speak for half an hour in the Catshuis (the official residence of the prime minister), before our Dutch ministers. Let’s see if I can stimulate them, if I can tickle prime minister Mark Rutte with ideas.”

Artist Daan Roosegaarde calls them “Lego from Mars”. CRYSTAL are hundreds of crystals of light which brighten when you touch them. Each Crystal contains LEDs that are wirelessly charged via a magnetic floor. People can play with them and share their stories of light. CRYSTAL has been previously exhibited in Amsterdam, Paris, Moscow and is now permanent in Eindhoven, The Netherlands.