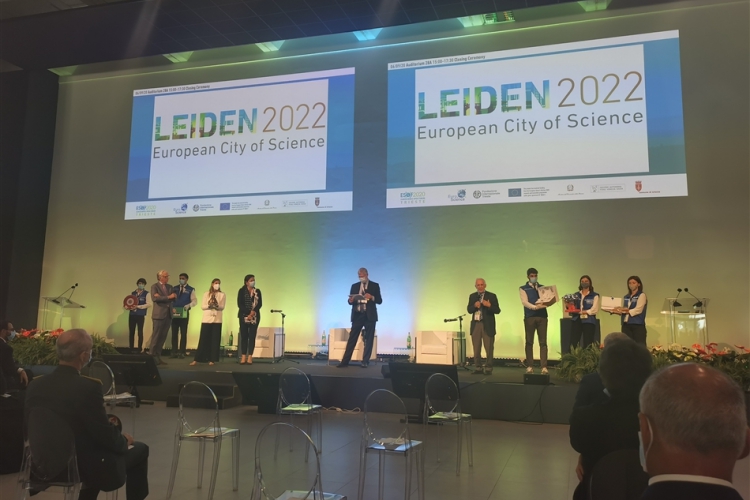 On 6 September 2020 in Italy the prestigious title of European City of Science was officially handed over to the city of Leiden. Henri Lenferink, mayor of Leiden, received the title from Roberto Dipiazza, mayor of Trieste, in the presence of Italian prime minister Giuseppe Conte. During the past week, the Italian port and city of knowledge was the backdrop to the international EuroScience Open Forum (ESOF), Europe’s largest interdisciplinary science conference.

Lenferink: “In 2022, Leiden will form the stage for the cream of European science. And true to its nature, Leiden has the ambition in 2022 to inspire as many curious people as possible with new knowledge, for example with the programme ‘Knowledge through Neighbourhoods” (Kennis door de Wijken). Preparations are in full swing and we are looking forward to a fantastic year of knowledge and of science in Leiden.”

With the title of European City of Science, Leiden as an international city of knowledge joins the select ranks of EU cities in the vanguard of Science, Culture, Innovation and Green Capitals. As the Intendant of Leiden European City of Science, Lucien Geelhoed is responsible for drawing up the programme which, in addition to the scientific content, will include an interactive public programme lasting exactly 365 days under the motto ‘A little wiser every day’ (Elke dag een stukje wijzer).

The tenth edition of the ESOF conference will take place in Leiden in July 2022. This year’s conference was held in the Italian city of Trieste. Notwithstanding Covid-19, the organisers of the event, together with EuroScience in Strasbourg, succeeded in providing thousands of virtual participants with an extensive programme, which included 180 online sessions, around the central theme ‘Open Knowledge, Fair Future’.

Major keynote speakers included Jeffrey Sachs and Fabiola Gianotto (director of CERN). The programme focused on themes such as Sustainability, IT and Digital Technology, Policy and Citizen Engagement, and Smart and Sustainable Cities. The event in Trieste also featured a Science in the City festival.

In 2022, Leiden will be the scientific capital of Europe. The centuries-old centre of knowledge and culture is famous for its university, which enjoys international fame for the wide range of disciplines it offers. The city and the Leiden Bio Science Park are perfect examples of how science and scientific application work together. Naturally, the City of Knowledge and Culture will also present an extensive cultural programme together with local museums, theatres, creative talents and artists from Leiden and the surrounding area.

Meta Knol, director of Stichting Leiden 2022, says: “It is our ambition to establish connections across all dividing lines that will appeal to everyone. We will be gathering together in Leiden top international scientists and curious minds from all corners of the city, the region and the country. For a whole year, Leiden will be the place to be for expanding your horizons in unexpected ways.”