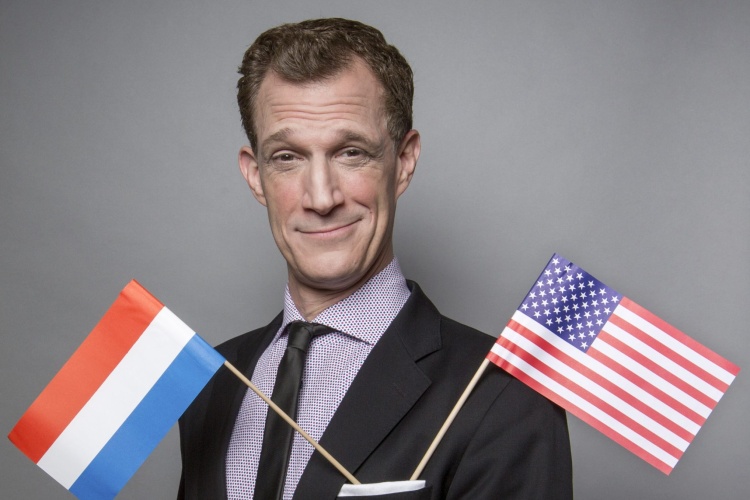 Greg Shapiro is a Dutch American comedian who gathered world fame with his vocal impersonation of Donald Trump in the viral ‘Netherlands Second’ video. He started his career as a member of the comedy group Boom Chicago and became a popular speaker at business events. “Humor is the safest option at a serious business event.”

Gregory Shapiro was seven years old when he saw the first season of Saturday Night Live. “That’s when I knew I wanted to be a comedian. And I found out that John Belushi, Gilda Radner and Bill Murray all started their careers at this one theater called The Second City in my hometown Chicago. ‘The Second City,’ as in ‘New York first, Chicago second.’ It was indeed my destiny.”

Did the viral video of your Trump impersonation in the Dutch tv show of Arjen Lubach change your life?

“Totally changed my life, bigly. Hyuge! Hahaha. I don’t know if the ‘Netherlands Second’ video changed my life, but I did enjoy hearing that it was used by the Dutch foreign ministry for trade missions! Personally, I used my Trump impression for a whole standup show – as well as for conferences like The Next Web. We interrupted the show with screens saying ‘Donald Trump Live by Phone’ and had me doing a voiceover from offstage. Then Trump would improvise his reaction to how the conference was going so far. It’s a formula we used many times since!”

What do the Dutch think of you as the ‘American Netherlander’: have you become one of them or are you still that crazy American?

“I’m still that crazy American, who can’t stop observing how crazy Dutch culture can be. Luckily most Dutch people still can’t get enough of it. I wrote my first book with tales of my clumsy assimilation into Dutch culture. And my second book was a quiz with all the questions I think should be on the Dutch citizenship exam. Whether I’m asked to join a conference as host or speaker, my Dutch ‘masterclass’ frequently comes in handy.”

When is humor a good recipe for a serious business event?

“Humor is always good. Even during a serious business event, humor can actually be the safest option. I recently hosted an event where the CEO wanted me to create an informal atmosphere – a ‘safe space’ for the audience to feel comfortable asking the difficult questions. And sure enough, someone asked about accusations of ‘greenwashing.’ The CEO gave a serious answer and admitted that in the past few years the accusations were partly true. And that’s why they’d appointed their first-ever Chief Sustainability Officer. Once he was done, I turned the humor back up to 100% by saying that if anyone complains about Dutch companies not being green enough, remind them that Shell Oil is now located in the UK.” 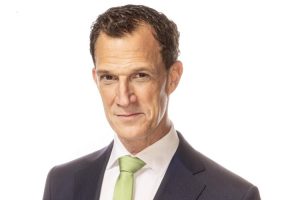 What was the most successful business meeting you hosted?

“2007 was the first time I was hired not just to host a business meeting, but to help plan it. Since the boss was known for being very serious, we decided to make me the co-host. And since the theme was on-boarding a huge amount of new employees, we decided that the boss would introduce me as the head of a new tech company they’d just acquired. And I would constantly remind him I had no idea what he was talking about. It was hugely effective. It forced the boss – as well as the audience – to simplify their inner workings. It also forced the boss to be less serious! Afterward, I heard the boss’ colleagues say, ‘he was like a whole different person – I had never heard him laugh before’.”

Do you have an example of a business event where your humor didn’t work out well? How did you manage to get that meeting back on track?

“NATO, 2005. The head of the Dutch military was a big Boom Chicago fan, and he hired us to perform for a NATO summit. Specifically, he wanted our sketch with Osama bin Laden making a dating video. He insisted NATO defense ministers would find it just as funny as he did – and they did not. Their collective reaction could be described as stunned silence.
But we still had half a show to perform! So we pivoted to the tailored material we had prepared. And as soon as we played a game called ‘How Well Do the Defense Ministers Know Their Personal Assistants’ we got them back on board and won them over.”

How come you are increasingly requested to perform at climate technology and sustainability events?

“In my standup comedy shows, I talk about how Dutch innovations don’t get enough credit. Sure, Royal Haskoning will help build a new Deltaworks in New Orleans. But you won’t hear about it, because Dutch culture is all about not bragging. So I made it my job as a loud American to become a kind of cheerleader. I started using my books and my YouTube channel to highlight Dutch innovators, especially in climate and sustainability. By now I’ve worked with TU Delft to help the energy transition, I’ve worked with Mosa Meat (lab-grown hamburgers), and I’ve even coached TU Eindhoven students on how to better pitch their ideas. The Netherlands has climate technology that can save the world – but not if nobody hears about it!”

How was it to perform for the King of the Netherlands?

“What a revelation! Since Dutch culture is known for saying ‘Doe Maar Gewoon’, you’d think Dutch business leaders would be calm and relaxed around their king – and you’d be totally wrong. There were so many pre-meetings and protocols… I was hosting the event. And before the king entered the room, I had to read out a list of how the audience should behave. So I remarked, ‘Wow, this guy is high-maintenance.’ Luckily, as I heard later, the king laughed. I was thinking: ‘Hey, let’s not bow down too low. Don’t forget we’re paying his salary.’ The event was for Dutch agri-business, celebrating the fact – amazingly – the Netherlands is the world’s second biggest agricultural exporter. And guess who’s number one? The United States. So I was happy to report that – in terms of agricultural business – it is indeed: ‘America First, the Netherlands Second.’ And the king laughed. I felt like a true jester.”

What is your expert advice for hosts and speakers who want to be funny?

“Good news! You don’t have to do anything – just be yourself. As we say in improv comedy, ‘Truth is funnier than fiction.’ All you need is a good co-host to help you be yourself. You need a good wing man!”