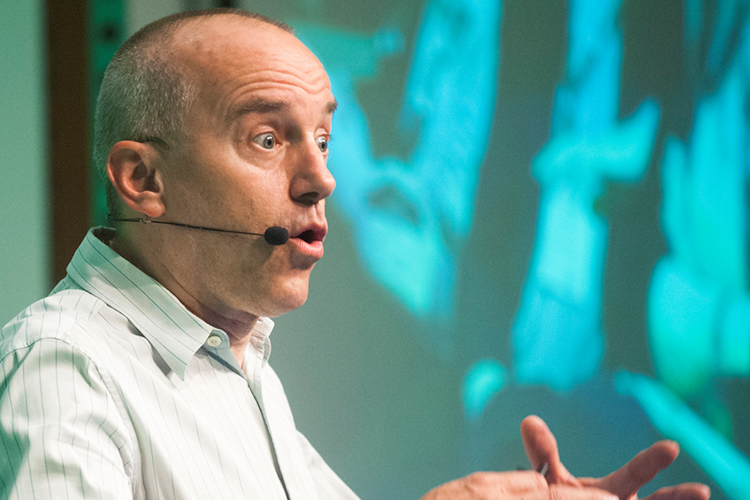 Meeting Design is the hype of the day, but the demand for interaction is as old as the road to Rome. After thirty years of experience as a meeting architect and as the author of a manifesto on this subject – written ten years ago! – I have come to the unfortunate conclusion that we have made little progress, and time is running out…
1987, the start of my career as a meeting architect. In the Bouwcenter in Antwerp, I provided sound and image (then 35mm slides) for a medical conference with four break-out rooms. The organisers approached me and remarked that the speakers were so boring that people were falling asleep and that they, therefore, could use some more interaction.
Thirty years later, I still get the same question. Or worse yet, I still see a lot of boring sessions where no one is paying attention. Is it really a hopeless mission?
Meanwhile, there are already many solutions available that I could not have dreamed in 1987, but which often deliver disappointing results. We use an app for interaction, a new kind of microphone, we ask the speakers, but without success.

Interaction is unfortunately not the natural state of speaking fellow humans. I estimate that 90 percent of all speakers are professional in something other than speaking. They are, for example, experts in nuclear liver oncology. Because they are speaking to other experts, they are extremely nervous. And because there are now also female experts sitting in the audience, the (often male) speakers want to show off their intellect as a peacock spreading its tail.
Not ideal conditions for interaction: lots of content, lots of stress, little experience. It is therefore not fair to these types of speakers to add the additional burden of interaction to their plate. It just doesn’t work!

It’s not fair and it’s stingy! Training, guidance, scripting, facilitating, design, et cetera, costs either time or money. But do not make it too difficult because every step is an improvement. Start with a few speakers or sessions, or facilitate a meeting for all speakers.
However, as an organiser, you have to do something, because continuing as we are doing now could cost more: namely the event itself …

Interaction is becoming increasingly important for the following reasons: the youth. The young oncologist, born in 1997, learns just about everything via the internet today and has less time than ever for a three-day congress and two days of travel.
The young professional estimates the usefulness of a congress a lot lower than those born in 1987, let alone those from 1957. Learning from speakers is no longer recognised as a reason for travel. Networking on the other hand… that is the treasure, and interaction is the key that opens the treasury.

For the sake of clarity: Interaction is not a panel or Q&A! The really valuable interaction is not that between the speakers and the audience but between the participants.
Small-Group Activity, if done well, is potentially the golden moment during each session. Groups of participants learn from each other, contribute themselves and get to know each other better (around the table). This provides value to all sides of the participants objectives-triangle: Learning, Networking and Motivation.
So, now that we know how and why we only miss one thing: the courage to tackle it. And that is often exactly where the problem lies. Many meeting planners and conference organisers are not creative: they are often logistics planners. Nobody has an excess of time and nobody is really a fan of revolutionary change. Certainly not when it concerns their own job. There is still a lot of work to do to create the conditions that allow for real interaction.

Fortunately, there is also a quick solution. The short-cut is a facilitator or even better: a meeting architect. That’s someone who does four things:

The Russian edition of the bestseller Meeting Architecture will be presented on October 14th at EuBea Festival  in Saint Petersburg. Meeting and event professionals will have...