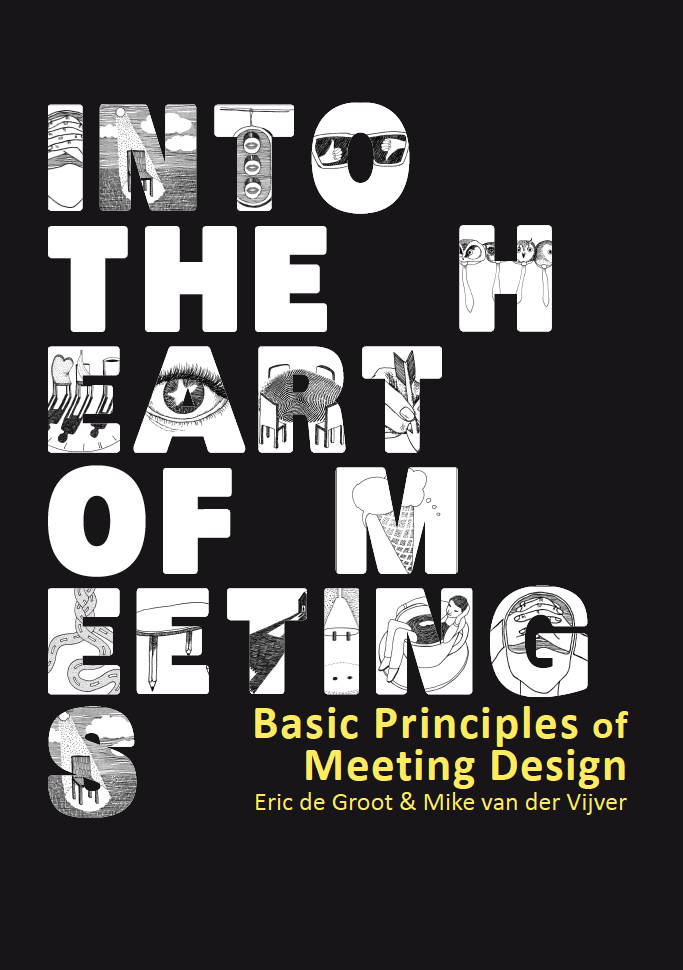 Basic Principles of Meeting Design. While the topic may suggest we are dealing with outward appearances and some basic rules of thumb, the fact that we actually want to address the heart of the matter is evidenced by the very title of the book: Into the Heart of Meetings. Eric de Groot and Mike van der Vijver have written an in-depth treatise by considering the science of communication and human interaction to be the foundation of organising meetings.

Both authors have some twenty years of hands-on experience with the matter, having attended some 2,500 meetings all over the world in a variety of roles: they have been participants, translators, speakers, actors and – naturally – meeting designers. As such, they have been able to provide many examples of how the basic principles covered in the book are actually translated in practice. In addition, the two writers know all too well what their critics – those who think the standard meeting model cannot be improved in any way – advance to counter their views. They respond to such criticism in a novel way by entering into discussion with such a critic at the end of every chapter.

How do circumstances and physical contact affect our brain and our behaviour? What influence do cultural differences have on communication? How important is it to make use of general knowledge? In Part One of the book, de Groot and van der Vijver lay the foundation of their argument, by unveiling the principal factors influencing the final result of a meeting. In so doing, they point out the special characteristics of meetings as a means of communication, a subject highlighted in the final section, called ‘The Magic of Meetings’.

At that point, we’ve already reached the halfway point of this book of well over three hundred pages and come to Part Two, which has the authors discussing the goal of any meeting. The participants and guests to a meeting base their view of the identity of the ‘owner’ of the meeting by what occurs during it.  As such, meetings are a premier instrument to ensure they come to have a certain view, or come to hold it more strongly. The meeting designers next guide the reader in properly formulating a goal.

Like in the rest of the book, in this section, too, de Groot and van der Vijver do not simply list a number of do’s and dont’s. While narrating, they identify all factors at play and how one can look at each of them. They continue this approach in Part Three, which covers the actual organisation of the meeting.

This mix of theory, examples from their own experience and final discussion with critics turn the book into a truly educational volume, allowing the reader to get a more in-depth acquaintance with the principles of meeting design in an enjoyable manner.

Into the Heart of Meetings, by Eric de Groot and Mike van der Vijver, can be ordered on amazon.com. The book, of well over 300 pages, is offered at approximately €20. The Kindle Edition at €11.