Leeuwarden, Friesland: The Unexpected Pearl of Europe
Skip to content 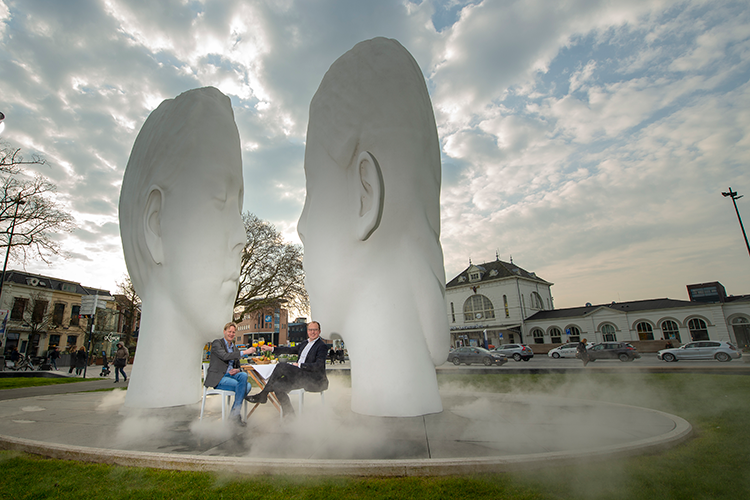 “A fantastic and effective conference plus an amazing experience!” in the words of one participant. A real compliment for the Frisian cocktail of perfect venues, organisational power and surprisingly original hospitality.

As Frisians who have traveled halfway around the world, deputy mayors Sjoerd Feitsma and Friso Douwstra understand the uniqueness of Leeuwarden and the province of Friesland. They are happy to promote this perfect leisure and conference destination. With great success, as evidenced by the many glowing testimonials from conference organisers and participants.
A prime example is the international conference for performing arts: “The ISPA Congress (…) will stand out as a congress of unique experiences. The atypical experiences of visiting the Oerol Festival on the island of Terschelling and the pub crawl offered delegates an opportunity to take in the distinctive culture of our hospitable host community. The host team was very well organised and provided an unforgettable experience for all delegates.”

Leeuwarden is hip and happening. The city is bustling with innovative activity; the attractive city centre is full of historic buildings, museums, shops, a wonderful nightlife and unexpected cultural gems. From here, you can also easily enjoy the tranquillity of the countryside with unique views, the Frisian lake district, the Wadden Sea (a Unesco World Heritage site), the Ijsselmeer lake with its world-famous Afsluitdijk, Friesland’s historic villages and cities, and the Frisian forests.
Sjoerd Feitsma: “When we were European Capital of Culture last year, we received many thousands of visitors who experienced Friesland for the first time. They were clearly enthusiastic about what they found; they gave the city and region top scores. We were ecstatic when Lonely Planet ranked Friesland third place of the ten ‘Best of Europe’: ‘This unspoilt northerly province is the spot to take your foot off the pedal and go slow, Frisian-style, amid raw coastal nature and a profusion of namesake black-and-white cows.’”

Leeuwarden also thrives on innovation. Especially when it comes to water technology, agrifood, energy, sustainability and culture and every conceivable cross-pollination in-between.
Friso Douwstra: “Leeuwarden is widely known as the start and finish of the world-famous eleven city ice skating tour, which connects our historic cities. Due to the climate it’s rarely held on the ice anymore, but that doesn’t stop us: racers walk, swim or even sail by solar-powered boat!
Leeuwarden’s other claim to fame is its leading role in water technology worldwide. Water is a global theme. The Water Campus in Leeuwarden brings international companies, universities, knowledge institutes and governments together. Sharing knowledge enhances understanding, which is why Leeuwarden is the go-to city for water-related conferences, such as the European Water Tech Week last September.”
Sjoerd Feitsma adds: “Since last year you can also take a new kind of eleven city tour: discovering eleven fountains, designed by internationally renowned artists. All of them have experimented with water in a different way. In Leeuwarden we have a mist fountain, for example, and in Dokkum we even have an ice fountain: the eleven city tour has gone high-tech!”

Thanks to close cooperation with our Dairy Campus and innovation with all parties in the dairy chain, Leeuwarden is also the Global Dairy Capital. Conferences are important for sharing and enhancing that knowledge worldwide.
The International Committee for Animal Recording (ICAR2020, about 600 participants) will hold their 2020 annual conference in Leeuwarden. “We didn’t just choose Leeuwarden because the city is the leader in dairy and food,” says Hans Wilmink, chairman of the organising committee, “but also because of the excellent accommodation, the charm of this compact city and of course the Frisian hospitality.”

In a province as naturally stunning as Friesland, it’s no wonder that sustainability is an important theme. Friso Douwstra: “In 2017, the Energy Campus was launched in the field of sustainable energy. An important part of its work is the organisation and facilitation of knowledge events.”
Another focus is culture. Sjoerd Feitsma: “We use culture as a catalyst for social and economic prosperity. As a Cultural Capital, we have put serious issues such as biodiversity, circular economy, sustainability, creativity and social inclusion high up on the agenda through cultural projects. This has also led to interest from companies, investors and governments.”
“We believe in the connection between culture, society and the economy. Dreaming, daring and doing things together leads to a better, stronger and more beautiful world.”

One participant in a multi-day conference said: “Meetings are often held in luxurious and also rather anonymous, conference buildings with a starred restaurant. Our conference in Friesland was spectacularly different because unusual, inspiring combinations were made in the excursions. One minute you’re meeting in a skyscraper ten floors up, with panoramic views over the city of Leeuwarden. The next minute you have sessions in an old prison, now a cultural hotspot, and in a former palace of the royal family, the Nassaus. The next day we had an excursion in the dunes of World Heritage Site The Wadden Sea and participated in a sustainability project at a cultural festival. Everything fitted in wonderfully with our themes and it was perfectly organised: a very inspiring experience!”
Organisations looking for a location can contact Friesland Convention Partners (FCP), a partnership of 27 companies. Jant van Dijk, partner of FCP and owner of Convention Bureau Friesland: “The review you just read is a perfect example of the Friesland Vibe: the customer delivers the content and together we find the perfect form and mix to create an unforgettable event.”

A selection of international conferences in Friesland-Leeuwarden in 2018