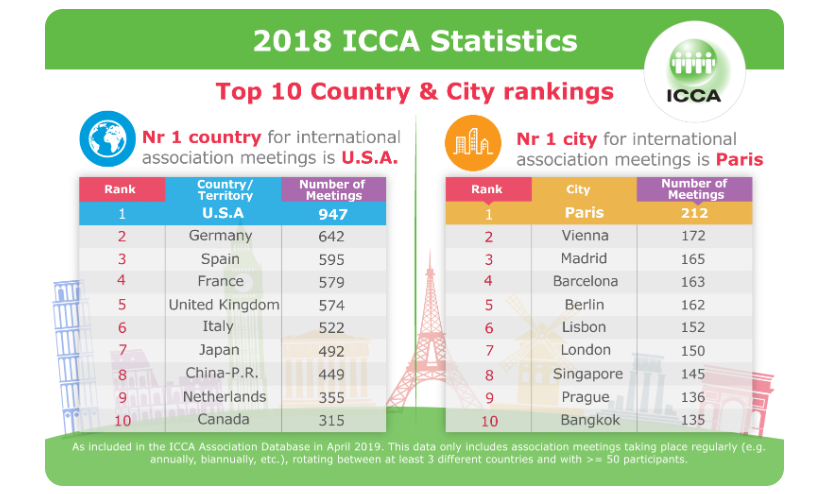 In the ICCA 2018 convention city rankings Paris storms ahead in first place. The French capital climbs to the top of the city rankings by number of international association meetings with a landslide margin of 40 meetings above second place holder Vienna. In 2017, Paris and Vienna held joint second place, with 190 meetings each. The International Congress and Convention Association (ICCA) published its yearly ranking of conference cities an conference country on May 13. The USA remains unchallenged for another year in the conference country rankings.

Paris, which previously held the top city spot in 2016, returns in 2018 to claim first place. Last year’s number one Barcelona falls to fourth place, with Madrid entering the top 5 for the first time since 2015 in third place. Among the top 5 cities for another year, Berlin falls to fifth place from fourth in 2017.
Remaining in the top 10 but changing position are London, Prague, Singapore and Lisbon. London, Singapore and Prague drop to seventh, eighth and ninth place respectively, and Lisbon climbs three positions to hold sixth place. Bangkok rises seven places from 17th to 10th, knocking Seoul out of the top 10. Seoul falls to 15th place, surpassed by top 20 risers and joint position holders Amsterdam and Tokyo, which jump from 16th to 13th place and 18th to 13th place respectively. Buenos Aires stays firmly in 11th place and Hong Kong rises to 12th. Dublin drops four places to 18th, and Stockholm holds 19th place for another year. Montréal, QC and Rome drop out of the top 20, and newcomers Brussels and Taipei enter in 17th and 20th place.

Top 20 city ranking by number of meetings organised in 2018

In an unsurprising turn of events, the U.S.A. remains in the top country spot, unchallenged for over two decades. Germany remains in second place and 2017’s number three the United Kingdom drops to fifth place, overtaken by Spain, which rises to third. After exiting the top 5 last year, France re-enters in 2018 in fourth place. Italy replaces France in sixth place, and Japan and China-P.R. remain in seventh and eighth place for another year. The Netherlands and Canada swap positions, coming in at ninth and 10th respectively.
Portugal remains in 11th place and Republic of Korea climbs one position to 12th. Brazil and Poland fall one place to 17th and 19th respectively, and Switzerland drops to 20th place, while Australia and Sweden climb to 13th and 14th. Austria remains in the top 20 but falls four places to 16th. Newcomer Argentina regains its position in the top 20 after falling to 21st place in 2017, knocking Denmark from 20th to 22nd place.

Top 20 country rankings by number of meetings organised in 2018

The ICCA’s annual country and city rankings are focused on charting the growth of international association meetings. Only those meetings that meet ICCA’s stringent assessment criteria – rotating between at least three countries, have a proven attendance of at least 50 participants, and are held on a regular basis – are recorded within the global association’s annual statistics.
ICCA CEO Senthil Gopinath said: “Although the most comprehensive global benchmark of the international association meetings sector, the ICCA rankings should not be mistaken as providing an overview of the entire meetings industry. We always seek to encourage and advise ICCA members to consult other rankings and collect their own meetings statistics to help them provide a full picture of their performance.”

“We have recorded our largest ever annual snapshot of the immediate past year’s meetings data in 2018,” Gopinath continued. “These results closely follow the release of our 55-year history of the international association meetings market in October 2018.”
“ICCA’s latest figures uphold the mature, robust growth pattern we identified in this report and provide more evidence of our firm belief that the association sector continues to be an unrivalled stimulator of global societal development and force for progress across the globe.”
The full ICCA statistics reports are available now to members in the ICCA Destination Comparison Tool. The rankings for all countries and cities will be released to the public in mid-June. 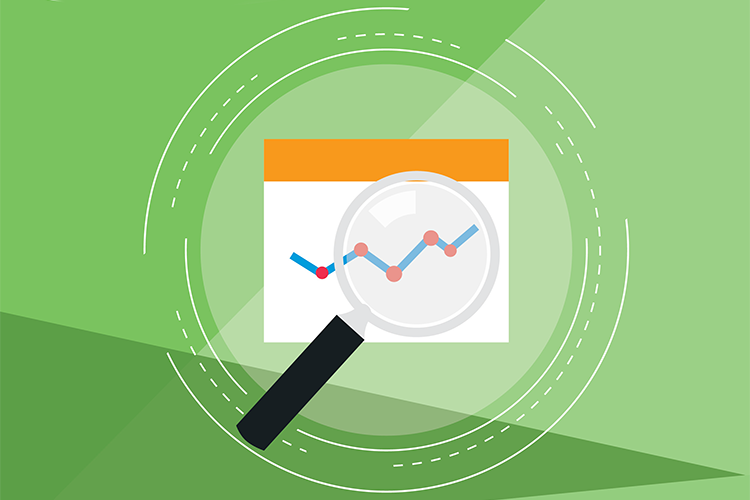 Barcelona claims first place in the ICCA city rankings by number of meetings in 2017 for the first time since 2004. The country rankings only...