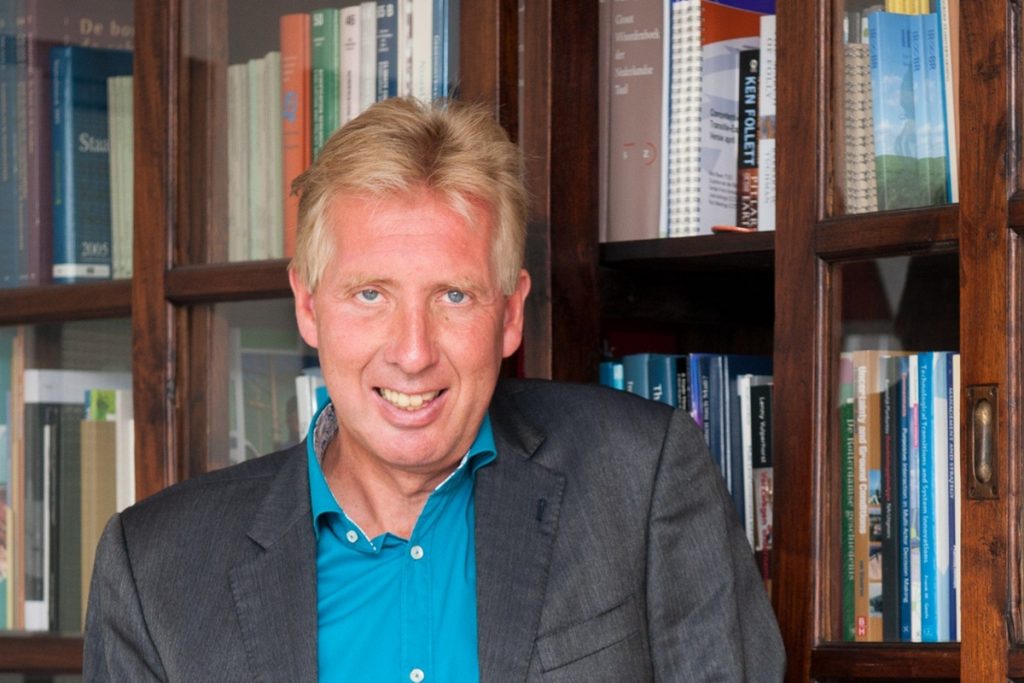 De Volkskrant described him as ‘quite a brilliant visionary’ and ‘an indestructible optimist.’ Nevertheless, Jan Rotmans is worried about our world: “I see my optimism as a moral obligation. The Netherlands has to be truly sustainable in twenty years.”

How did you become a speaker?

“It’s something I have always been able to do, because really speaking well, that is something you cannot learn. You need to be able to touch people and what is neccessary for that is passion. In primary school, the other kids gave oral reports about bunnies, while I came in with Stalin and Hitler. It drove the teachers crazy because I bullied them. I wrote fake letters to ministries and embassies, saying that I was a teacher and wanted information about a theme or a country. Once, I even ordered a whole truckload of teaching modules from the Canadian Embassy; Van Gend en Loos delivered them to me at home. My mother me take them to school myself. I was lugging boxes for a whole day. Everyone looked at them with amazement. Even as a young boy, I wanted to change the world. ”

When you are standing on a stage, do you have one message?

“I never tell the same story twice. I think I’m the only professional speaker in the Netherlands you can say that about. Every context and time requires different content. However, when you’re talking about sustainability, there are overlaps. You see in all sectors, from the care sector to the financial world, that they focus on the short term: high efficiency, preferably right now. There is a lack of vision. Organisations become stuck in a certain direction and are judged by ‘traditional values’, such as efficiency and profitability. An increasing number of people want to escape from the stranglehold. We find other values important, as well: quality, space, well-being, the human dimension. Those old system values clash with human values. I sketch that abrasive reality and show how it can be different. ”

What is your specialty?

“I have the power of persuasion.” Anyone who hears me speak will not soon forget it. On stage, I use all my passion and energy, and that can be penetrating; it does something to the people. They feel that they need to take action: sometimes it keeps them from sleeping. Sometimes I must also hurt organisations. If I tell the real estate sector that their crisis is going to last at least five to ten years, that does not create an immediate round of applause. But I expose what needs to change. And that shakes people up. I am also an fierce optimist. Every day, I see reasons to be concerned about the world, but I never stoop to finger-pointing. I like to see myself as a master in the art of living, that means that you enjoy everything you do. That, too, you can see on stage.”

What is your worst experience as a speaker

“My first lectures were dramatically terrible. They were too long and incomprehensible to the public. I also wanted to shock people. I have experienced that, after one of my lectures, there were only five of the fifty people left in the room. I was uninhibited, unpolished and stepped on everyone’s toes. ”
“The five sympathizers spoke seriously to me: “Jan, you’ve got talent, but if you antagonize everyone, it won’t help you.” If I had continued in that direction, I would have had a small audience forever. I learned from gigs in pubs, small rooms, even in a meadow among the cows. ”
“I’ve been through a lot, even, that my first overhead sheet went up in smoke on the overhead projector. Once, I had the hiccups on stage in Belgium and that was amplified through all the speakers; the audience was in stitches. In short, I learned the trade in practice. And that shaped me. You live and learn. ”

What is your passion?

“What I do is what I am. That is my strength. That’s why my performances are completely natural. I’ve always said: I want to see how I can make the world more sustainable. Or find out why you cannot, why it does not work. For it sometimes seems impossible.”
“I decided to use all my strength to do what I can. Preferably in the neighborhood: in my own country, in my own city, in my own street. The first ten years I worked globally, but that changed when I had children. Now, I am slowly getting the itch again to spread my message globally. In New York, when I worked for the United Nations, I had the feeling that I was at the epicenter. I had that less in Maastricht. ”

Have you recently been surprised about anything?

“When I started, sustainability was something the government did. I walked around on ministries in The Hague every day and we asked ourselves: how do we get those companies involved?”
“Now it’s the other way around. Companies ask me how they can convince the government. This revolution took place over a period of 25 years, but I watched it with amazement. It is precisely when you are at the cradle of something that you notice it. Other people cannot imagine that: it’s a bit like trying to explain to your son that Ajax was once the best football club of Europe.”
“The nice thing about the sustainability turnaround is that the power now comes from the bottom up through society. People are increasingly taking their own initiatives and the government does not only control it from the top. I could never have imagined that I would be speaking about sustainability in football stadiums or at Lowlands.”

More than two hundred scientific publications, twenty books and a worldwide climate model, IMAGE (including in the climate negotiations for the Kyoto Protocol) are just some of his achievements. Jan Rotmans has founded two research institutes, ICIS in Maastricht (1998), and DRIFT in Rotterdam (2004), which focus on sustainable transitions. On stage, his ‘socially driven science’ guarantees boundless energy, passion and insights that incite to action.