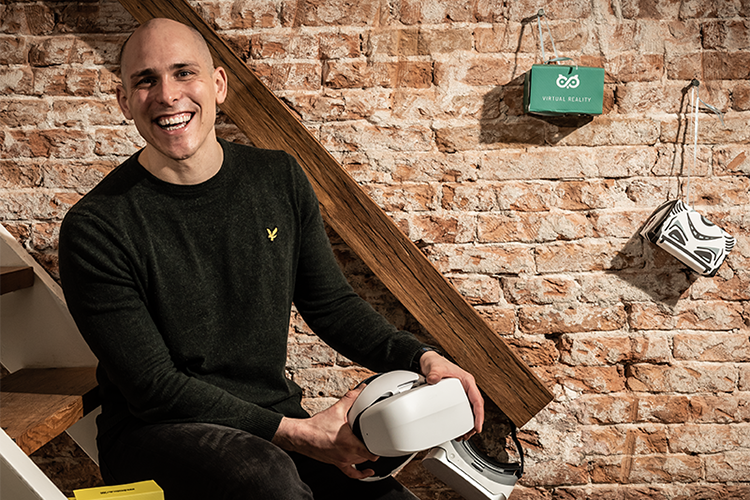 VR Owl is located in the centre of Utrecht. They have a large office where about 25 young young people sit at their computer screens to come up with new technologies and to develop them.

“This is where it all happens”, says Tim Nijland, as he leads us through the various departments, playing the host. We see animations being created, we discover the secrets of augmented reality and notice that there are a lot of things involved if you want to show a 360 degree video using virtual reality glasses.

Nijland is the chief marketing officer at VR Owl, which was founded five years ago. Wonderful things happen in his wonderful world, he explains.

“We are working passionately on the future. Together with our customers we create new applications that they can use at their trade fairs or conferences. We always look at the objective first and only then determine which technique is most suitable.”

“It’s not about the means but about the message. But you want to communicate your statement in an original way and that is why we look for innovation every day. This is appreciated by customers. Large parties such as Tele2, Shell, KPN and Nespresso are knocking at our door.”

To know what we are talking about, let’s first dive into the two most important concepts it all revolves around: virtual reality (VR) and augmented reality (AR).

Thanks to virtual reality, you can create a kind of false reality. With glasses that shut out reality for the moment, you end up in a different environment.

“Very nice for games, but also during conferences and events you can use them. Until recently, the glasses were used individually. Now you can give a whole room glasses and offer the same experience at the same time.”

“But I do think that it really needs to add something. Otherwise it’s better to use a screen.”

Adidas, together with Footlocker, for example, presented a new sports shoe in VR. It became a great experience, which created a shared feeling.”

With augmented reality (AR), glasses are not set up to shut out reality. You look at your surroundings through a kind of Google glass glasses, which things are projected into, or via your smartphone. With AR you enrich the reality of the moment with objects or persons who are not there at all.

Nijland: “One example is a hologram. Then someone speaks to the congress while they are not there. But you can see them in 3D. It also adds something during trade fairs. Exhibitors always have to make choices about what they do and do not take with them. Thanks to augmented reality, that is no longer necessary. You can show every version of every car.”

Tim Nijland enjoys the techniques and especially the boundaries that are shifted every day. “More and more is possible. I think that in the future we will wear contact lenses that contain all the technology, so that you can get virtual tips wherever you go. The intermediate phase is that we all wear glasses.”

“Imagine you visit a trade fair and enter your preferences online. At the fair itself a personalised route is made for you based on these preferences, and you follow this using the glasses. That is really not a long way off. It’s really going to happen!”

The technical revolution we are part of is having great consequences, predicts Nijland. “For example for conferences. If you use the techniques well, you can do something with them in the plenary session but also in breakout sessions. You provide information that is processed in a game that you play together. This lets you provide the convention with more entertainment!”

“And that is also possible at trade fairs. A large American company brought people to its stand in an original way. In virtual reality, the visitors were able to hit a baseball at a real pitch, while they imagined themselves in a full stadium. That’s great! It led to long queues at the exhibition stand and you as an exhibitor could start a nice conversation with the visitor.”

In the future, all new technologies will be even more mixed together, predicts Nijland. 360-degree video becomes more refined and can therefore be used even more effectively in virtual reality, but 3D and animations are also taking flight.

“Fokker has windows that colour with the light that falls into it. How can you show that, was the question to us. We can not put a real plane on a stand, so we made a 3D animation of it, which comes to life in virtual reality. Very special! And what about the Driver Licensing Centre. For that we have developed a crash in VR, to let people experience what happens when they drive into a wall. Confronting but instructive.”

The VR glasses are also great giveaways at fairs, says Tim Nijland. “We have developed a piece of cardboard that you fold up into glasses, where you then place your smartphone. Using an app you can watch a video that really comes to live thanks to the glasses. You give the cardboard glasses away as a present and of course they also contain a lot of information from your company. If you have the courage to think creatively and walk alongside the beaten track, it will deliver great ideas. For every company.”