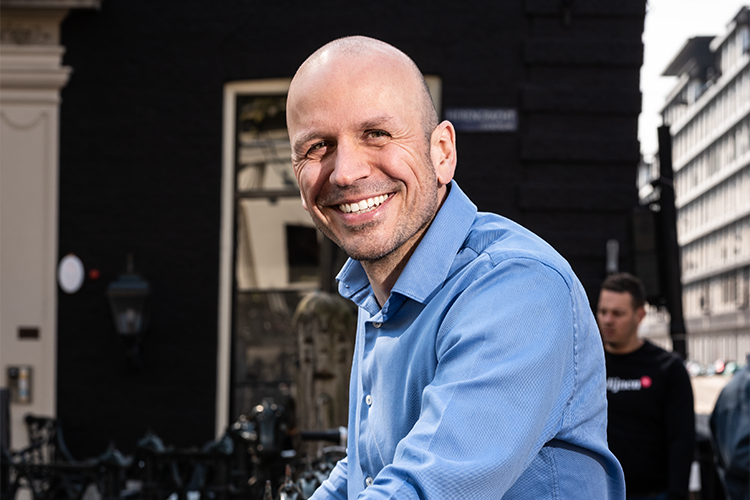 Education. Doing Well. Organizing. Sustainability. Four subjects that are close to Holger Omlor’s heart. In his position as Head of Events at the European Association for International Education, these different passions come together nicely.
Holger Omlor was born and raised in Saarland, Germany. Love brought him to Amsterdam in 2003. Long before that, he had already been ‘captured’ by the organizational virus.
“I’ve thought about it, but I don’t think the love for organizing comes from my parents. My mother was a primary school teacher and my father worked for an insurance company. I have my father’s dexterity: taking care of things, doing jobs, being physically busy.”
“At our secondary school there was a group of about forty students, teachers and former students who were actively working for a good cause. I was one of them. We organized an annual Music Week at school and little by little some activities were added.”
“The money we raised went to our own charities, often with a link to education. Over the years, we built a number of schools in South America and Africa, for example.”
“What I remember most was that I liked networking and working together so much. There were groups, but I got along well with everyone. That feeling of being able to create something as a team that you can’t achieve on your own quickly appealed to me.”

“A friend of mine worked for an organization that organized youth travel. During my teacher training and sports science studies at the university, I joined the camp once as a camp leader.”
“I had such a good time there that I stayed after graduation. In addition to incentives and team building events, we organized sporty youth trips to Spain, France and Italy. Young people could indulge in daring sports such as surfing, skating, rafting, mountain biking and climbing.”
“Every summer we had about 20,000 participants. My job was to take care of a large part of the logistics. I really worked on my organization skills here.”
“When I came to the Netherlands, I continued to work for that travel agency for a while. Although at one point I wanted something else.”

“After doing some research, I applied for the position of project manager at Hoezo!. At this agency, we worked with approximately fifteen people on conferences and events, mainly for governments and other non-profit organizations. For example, we won the tender for Rijkswaterstaat (Dutch Department of Waterways and Public Works, ed.) three times in a row.”
“One of the first and nicest events I did at the time was the opening of Rijkswaterstaat’s new premises in Utrecht. It was actually several events in a few days: viewing days for employees and family members, Open Days for business relations, the official opening and more. Very varied.”
“Not long after that, the ‘Priority Road Works’ was introduced: work on the road was frequently started or completed somewhere in the country.”
“This meant that we had a lot of ‘first-shovel-in-the-ground’ and ‘ribbon-cut’ events. Luckily we had a very good network and we were able to make things work quickly.”
“We would be somewhere in the middle of nowhere and then you had to be creative: where do we place the tent, where do we get the electricity, where can we park and what is the Minister’s ‘act’ this time?”

They won me over

“I also applied to the European Association for International Education (EAIE). I saw the position of Head of Events on LinkedIn and I couldn’t let that one go.”
“Although I did have my reserves. At Hoezo! we had different associations as clients. These were often fairly traditional organizations with relatively little room for change. But EAIE’s well-written advertisement gave the impression that there was room for innovation and that won me over.”
“EAIE is the European Association of Universities and Universities of Applied Sciences engaged in international education. Think of exchange programmes such as Erasmus, student housing and summer schools. In total we have sixteen expert communities that cover the entire breadth of international education.”
“As Head of Events, together with my fantastic team of five employees – which has to be pointed out – I’m responsible for all events.”
“By far the most important is our annual conference. Last September, the 30th edition took place. In addition, we organize two academies (training courses), various ‘spotlight’ seminars, focused on one of the sixteen knowledge areas, and a number of internet meetings at various venues in Europe every year.”

“As said, the main focus is on the conference. The conference is four days long, receives 6,000 participants, has more than 160 sessions and contains a fairly large exhibition. In addition, each expert community has its own social event, and there are also other events such as the Opening Reception and the President’s Reception.”
“Over the past thirty years, the conference has actually only grown. We are now among the top one percent of the largest conferences in Europe.”
“That brings some challenges. Take, for example, choosing a venue. The criteria we use are simple: the venue must be located in Europe; it should be large enough; there has to be room for the exhibition; there should plenty of hotel rooms; it must be easily accessible internationally, and the costs should of course be appropriate. In addition, we need support from the local higher education sector and we also try to alternate between northern, southern, eastern and western Europe.”

“In principle, anyone may submit an offer. But in practice, we often have to say: ‘Interesting destination, but it won’t work’. There are only about 40 destinations in Europe that meet our criteria. Add to that a number of other factors and at the end of the road there are usually only five or six destinations left.”
“Dividing the conference at the same destination into two venues is also not an option. As soon as participants leave the building, you’ll lose them. We want to avoid that at all times. Moreover, most of the exhibitors are also participants. Participants often come in groups. They’ll have two people at the stand and four of them go to a session and they alternate.”
“Fortunately, we’ve always managed to create a special event. Three years ago we were in Seville, last year we were in Geneva and next year we are going to Helsinki.”
“By the way, we’re working way ahead. The destinations for 2020 and 2021 are already fixed, the tender for 2022 and 2023 is almost complete and we have started the search for 2024 and 2025.”

“We choose not to organize partner programmes or social programmes. Participants are perfectly capable of adding a piece of nature or culture to the programme themselves. Many people add a few days to the conference, for example. We do not need to facilitate this.”
“Of course, there will be festivities, such as the aforementioned President’s Reception, the Closing Luncheon and the traditional EAIE Dance on the last night.
“We outsource the organization of these events to local destination management companies. Through personal interviews we look for partners who come up with good ideas, who are professional and with whom we feel we have a match. That match is very important. In many cases, we depend on what is available. Think of in-house catering or AV equipment at conference venues. But at DMCs we have a lot to choose from and that’s why we’re really looking for a party that suits us.”

“An important spearhead for us – and I am pleased to see that attention for this theme is increasing considerably throughout the conference industry, as well as at universities and colleges – is sustainability and social responsibility. What can we do to make the world a little better?”
“We have put a lot of time and energy into this over the past period and we will continue to do so. For example, we started to compensate the carbon footprint of our participants. In the meantime, a complete Educational Forest has been planted. The venue in Helsinki is committed to ISO certification in the field of sustainability and is using our conference as a pilot, which will teach us a lot.”
“What I really like is that, because we are organizing such a large conference, we can really make a difference. For example, we can save 50,000 plastic cups in one go by choosing compostable cups and offering reusable bottles. In one of our future destinations, the cups will even be composted into fuel to power the local garbage trucks.”
“Furthermore, in consultation with the catering manager, we consciously opt for food made from local ingredients, which is really nutritious and does not just satisfy an appetite. We are also increasingly moving towards full vegetarian catering. By eating well and healthily, you will stay alert and you’ll be saturated longer.”
“In short, this awareness of how to deal with our planet in a responsible way will continue to grow. And we at EAIE will continue to make an active contribution to this.”